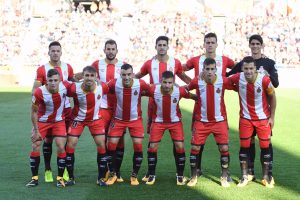 The Estadi Municipal de Montilivi dispute is scheduled to begin at 22:00 and opens the 28th round of the Primera Division. Girona and Deportivo, two teams in totally different shapes, but also in opposite poles in the ranking.

It occupies the 7th position with 40 points gathered in the first 27 rounds.
He crosses an excellent form and has won 3 of the last four games.
In the last 5 home games in the championship he has only victories at 0.
The offensive is quite good, 8th in the Primera Division and has 38 successes.
Defense is a little lower on 10 and has won 36 goals in the 27 duels.
Raymundo Suarez, Iraizoz and Planas have little chance to play because of injuries.
The probable team (3-4-3): Bono – Espinosa, Juanpe, Ramalho – Maffeo, Pons, Granell, Mojica – Portu, Stuani, B. Garcia.

He was on the penultimate spot with only 19 points in 27 rounds.
He’s in a nightmare, he’s not winning 12 matches, and he’s lost eight.
In the last 8 rounds of the championship he escaped once unbeaten.
Not the attack is her problem, which is the 14th in La Liga with 25 successes.
The defensive is the one that suffers, being the last of Primera with 57 goals.
Guilherme, Valverde and Cartabia are injured and may not be able to enter the field.
Koval is suspended after he has cashed a red card in the last round.
The probable team (4-3-3): R. Martinez – Boveda, Sidnei, Albentosa, F. Navarro – Borges, Mosquera, S. Muntari – L. Perez, Andone, A. Lopez.

Soccer Prediction of the Day Girona vs Deportivo

Girona impressed this season’s Primera from the newly promoted position, being ranked 7th, while her opponent in this confrontation was very poor and was only penultimate.
Deportivo, however, is not found and comes after a series of 12 matches without success and 8 of them lost.
And in the tour of this championship he won Girona away and I do not see why he would not do it now, especially because he will have supporters on her side.