Barcelona and Tottenham meet on Tuesday at 20:00 in Camp Nou for the final day of the Champions League group stage. The Catalans have already secured a place in the last 16, leading the group with 13 points, six more than Tottenham and Inter Milan. With the Italians receiving PSV Eindhoven, red light with only one point , the Spurs will have to achieve the same result as Inter to ensure their presence in the next stage of the competition. A task that is not easy foreseen. In the first lap, in London, Barça won by expressive 2-4. Will the English team have arguments to surprise at Camp Nou? 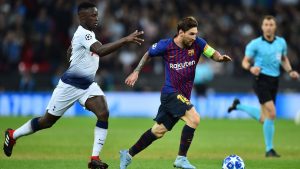 Football Prediction of the Day Barcelona vs Tottenham

Tottenham will have to take a chance and Barca are always dangerous. Looking also at the ideas of both coaches, we bet on a game with goals for both sides.

Bet Tips: Both teams to score