Ajax Amsterdam – Bayern Munich / Champions League – It’s all clear in this group on the eve of the last round, because Ajax and Bayern just dominated and won the finals in the eighth finals without losing their first five rounds. The other two rivals are far below, but remains open who will be the first in the group and thus have a lighter draw in the eighth finals. In this position, Bayern now has two points more than Ajax, so it is clear that the host needs to win, while the Bavarians have enough and not enough. The first match between these rivals ended in Munich 1: 1.

Excellent Ajax played the group phase of the Champions League and this score will not spoil any possible defeat in this match. The goal was to win the finals in the eighth finals and in that they managed in a fairly easy way, with three victories and two substitutions on the away matches with the biggest rivals. Remi at Benfica has practically verified the placement in the eighth finals, but it should also be noted separately in Munich, as they played greatly and were even closer to victory than the big rivals.Now they have a new chance on the home court to overcome the Bavarians and thus win the first place, although there is no big pressure. According to the Dutch championship, Ajax is in excellent form and have nine wins in a row, of which they mostly won convincingly. The last one was Zwolle with 4: 1, however, the goalie Onana and midfielder van de Beek were injured in this review, so they could miss this match.The likely initial composition of Ajax: Lamprou – Mazraoui, de Ligt, Blind, Tagliafico – Schone, Eiting, F.de Jong – Ziyech, Dolberg, Tadic

Bayern holds the first place in the group and this is what this team expected, although they are still not sure and should not be lost in Amsterdam. The only game they did not celebrate in the Champions League was played against Ajax, and this duel is definitely a big warning for Bavarians, since they were rescued from defeat on their field. Now they are in a somewhat better shape and they see it in the first matches, where they have won two victories. They have easily and conclusively won Benfica in the last round of the Champions League, and have been totally undefeated four times.Bayern have a lot of bigger problems and a loss of nine points for a leader from Dortmund, which will not be easy to reach. It was not easy for them before the two rounds at Werder, where they celebrated 2: 1, thanks to Gnabry’s goals, while they expected Nuremberg much more easily defeated in front of his fans 3-0. Attacker Lewandowski returned to scoring and twice shaken the opponent’s net. We do not expect Coach to make major changes in the composition of J.Rodriguez and Tolisso, and Robben is also questioned.The likely starting lineup of Bayern: Neuer – Rafinha, Sule, J. Boateng, Alaba – Kimmich, Goretzka – Gnabry, T.Muller, Ribery – Lewandowski 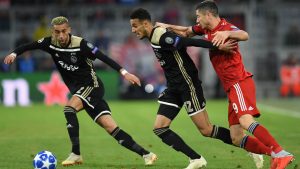 Football Prediction of the Day Ajax Amsterdam vs Bayern Munchen

Ajax has the opportunity to be even the first in the group and we believe that they will brave and attack this duel even though they have problems with injuries. Bayern will surely accept the rally and therefore this game could bring a lot of goals.