In the prologue of the round with the number 27 of Serie A, Fiorentina will receive the visit of the Brescia team, in a duel from the lower half of the ranking.
The match will take place on the “Artemio Franchi” Stadium in Florence and will start at 20:30.

He is on the 13th position, with 30 points, being 2 points behind the Sassuolo and Cagliari teams.
He is in a recovery of form, obtaining a great victory, 5: 1, away with Sampdoria, drawing later, 1: 1 with AC Milan and 0: 0 with Udinese, the last game taking place without spectators.
He has been without a victory on his own field since January 12, when he defeated Spal at home, with the score of 1: 0, due to a goal scored from the corner by captain Pezzella.
Coach Giuseppe Iachini has almost the entire team at his disposal, with one exception, on Kouame, but it can also be based on the newcomers of winter, Patrick Coutrone, Alfred Duncan or Agudelo.

He was among the only teams in the bottom of the standings that did not get any points in the last round before the competitive break, losing in the last game, 3: 0, away to Sassuolo.
It has only 16 points obtained, being probably a team that will surely relegate, the teams from the 18th place upwards having a much better quality, one of Serie A, including Lecce.
Away he has 4 defeats in a row, 5: 1 with Sampdoria, 2: 1 with Bologna, 2: 0 with Juventus and 3: 0 with Sassuolo. Defenders Cistana and Chancellor will be absent from the visiting team, both injured, as well as goalkeeper Afonso and striker Mario Balotelli.

▪️In the round, the two teams ended in a draw, score 0: 0, in a match in which the hosts had a goal canceled in the 4th minute, the match being dominated almost entirely by Fiorentina. 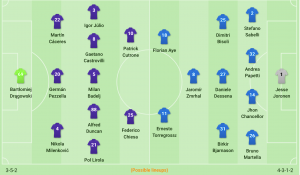 He did not win in the last 3 matches of Serie A, drawing with Genoa and Milan and giving up against Atalanta.
In reply, he won the last three home games against Brescia.
10 of Fiorentina’s last 11 matches have conceded less than 3.5 goals.
And in the last 10 home games he has never scored more than one goal.
He has no absences in the squad, so he can rely on the best formula in this match in which he needs all three points.

Brescia, even if it gave up in 9 of the last 10 away games, received 3 goals or more only in 3 of these games.
He failed to score from the action in the last four away matches, and in three of these games he gave up a difference of two goals.
Andrea Cistana has not recovered yet, so you can’t count on him in this game.
On the other hand, Balotelli does not play after arguing with the management and it seems that he will not return to the field until the end of the season. 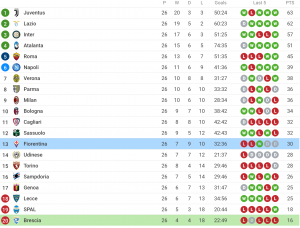 Football Prediction of the Day Fiorentina vs Brescia

This break period made the coach of the viola team, Beppe Iachini, to recover all the injured players, more precisely, Kouame and Frank Ribery, which makes Fiorentina clearly have the first chance to win.
And as Brescia lost in a friendly played with Udinese, score 2: 0, it seems that Fiorentina will prevail in this match, not the other way around, but money is still being put into the team for this team, and the results are still to be expected.
Therefore, Chiesa, Vlahovic, Cutrone or Frank Ribery are the players who should bring the victory of the viola team in this game, probably in front of the weakest team in the championship.